Home » Governing Alaska
After the purchase of Alaska

"As proper in sound as in origin"

Financial troubles at the Russian-American Company and the realization by Russia that it could not defend its territory in North America prompted the negotiations that led to the sale of Alaska. As the Russian minister to the United States put it, "American freebooters," meaning pirates, were "rapidly multiplying in the Pacific" and the country was hungry to keep expanding. "However spacious the regions of the United States Federation may be, they do not seem extensive enough for the feverish activity and spirit of enterprise of the Americans. They look upon that continent as their patrimony," wrote Edward de Stoeckl.

On the American side, three things helped lead to the sale - the idea of continued friendly relations with Russia, the doctrine of "Manifest Destiny" which meant that the country should continue to grow across the continent, and the bargain price of $7.2 million. 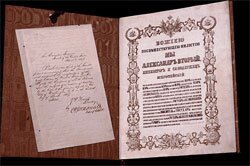 The treaty worked out by Secretary of State William H. Seward and the Russian minister, signed at 4 a.m.on March 30, 1867 never mentioned the name "Alaska." It referred only to the Russian lands on the North American continent. Sen. Charles Sumner of Massachusetts, a key supporter of the purchase, argued that the colony, formerly known as "Russian America" be called Alaska. "The name should come from the country itself," Sumner said during a three-hour speech he gave to the U.S. Senate urging treaty approval. It should be an indigenous name, he said. "Happily such a name exists, as proper in sound as in origin." It was the word used by Aleuts to refer to the mainland.

The proper name in Sumner's view was Alaska.

But far more important than a name or the days of the week was the need to provide the republican form of government that existed in the United States."Bestow such a government, and you will give what is better than all you can receive, whether quintals of fish, sands of gold, choicest fur or most beautiful ivory," Sumner told his fellow senators.

The United States bought the land, adopted the name and adjusted the calendar. But it was not until statehood, nearly a century later, that the people of Alaska would have the representative government that Sumner imagined.

The treaty to ratify the purchase of Russian America won easy approval from the United States Senate in 1867, but the United States House of Representatives was in no hurry to pay the bill for the sale. It wasn't until the following year, nine months after U.S. troops took over in Sitka, that the U.S. House approved the $7.2 million, which amounted to about two cents an acre.

The delay reflected the priorities of the time: Congress was busy with reconstruction after the Civil War and was in a battle to remove President Andrew Johnson from office. Johnson, who was acquitted by one vote in his impeachment trial, failed to persuade Congress with his call to make provisions for "the occupation and government of the territory as part of the dominion of the United States." By and large, Alaska was a low priority for the country and its leaders.

The Americans formally took possession of Alaska in October, 1867 after a memorable ceremony when the Russian flag was lowered. "At least the attempt was made to lower it, but as it caught and was torn in two it required the aid of some three or four Russian soldiers before it came down," witness Mariette Davis wrote. At that time the population of Alaska Natives was about 30,000, many more than any non-Natives.

The American flag did get hung up on the pole that day, but its raising did not trigger any population boom in Alaska, for there was no economic motive to lure people north. Relatively few people came to Alaska because it was difficult and costly to travel, and the fish, timber and mining industries had yet to develop. And most American cititzens knew little if anything about Alaska.

One example of the general lack of awareness was the discovery made by an Army captain making a journey on the Yukon River two years after the purchase. He figured that the Hudson's Bay Company outpost at Fort Yukon was in Alaska, and that the proper flag was not the Union Jack- the English flag. He saw to it that the Stars and Stripes were raised instead, and the Hudson's Bay Company had to move to Canadian soil.

"The new site chosen, at Rampart House on the Porcupine River, proved 20 years later also to be in Alaksa, and a second move was required," wrote Alfred Brooks, an important Alaska explorer and scientist.

Since the development of Alaska was not a pressing issue, Congress did not create a civilian government, leaving the new American possession in political limbo. For the first 17 years following the sale of Russian America to the United States, there was no government in Alaska outside of that provided by the Army, customs collectors and the navy in coastal towns. For all intents and purposes, it was a military district with no civilian laws.

One of the few laws passed by Congress during the early days of the American rule was one to ban the importation of alcohol and its sale to Indians. It was a law widely broken.

Since Congress had set up no rules for local government in Alaska, the new arrivals at Sitka took things into their own hands. 115 civilians signed a charter creating a city government. The town government levied taxes, started a school and some other facilities, but it didn't last long because some people refused to pay taxes to a government with no basis in the law. A bigger reason the town government failed was that many of the early speculators, in the words of an Army officer in 1870, "came, looked and went away."

The Question of Authority

The American flag flew over Sitka, but that meant nothing to most of Alaska's estimated 30,000 Native people., No one had asked them about the purchase of Alaska. Most remained unaware of the sale for a long time. In the interior region of Alaska there was no American presence for many years. Alaska Natives governed themselves through customs and traditions developed over generations, typically with family and group ties controlling behavior. As cultures that depended on fish and game supplies they knew how to set and enforce standards, with some variations from region to region.

In the largest Tlingit villages in Southeast Natives knew about the sale of Alaska and did not approve. Writing two years after the sale, Maj. Gen. Jefferson Davis said the Indians "frequently take occasion to express their dislike at not having been consulted about the transfer of the territory. They do not like the idea of the whites settling in their midst without being subjected to their jurisdiction, in some instances they have expressed a determination to exact tribute for the privilege of trading among them."

An 1869 report by an agent of the U.S. Treasury Department said the Tlingits argued "that their fathers originally owned all the country, but allowed the Russians to occupy it for their mutual benefit, in that articles desired by them could be obtained from the Russians in exchange for furs."

Though there were a number of confrontations and disputes between the Tlingits and the Americans for some years after 1867, most of the traditional uses of Alaskan land and water continued as they had for generations. The change in ownership meant little for the legal question of who "owned' the land and it seemed to have nothing to do with day-to-day living.

The Treaty of Cession said that any Russians who chose to stay in Alaska "shall be admitted to the enjoyment of all the rights, advantages, and immunities of citizens of the United States," but the agreement did not grant the same rights to the original Native Alaskans. It specifically excluded the "uncivilized native tribes" from any advantages."The uncivilized tribes will be subject to such laws and regulations as the United States may, from time to time, adopt in regard to aboriginal tribes of that country," the treaty said.

The first major American law in regard to Native people was an order that banned the sale of liquor to Indians. Smuggling continued, even though the importation of alcohol was also illegal.

The Army had never wanted the responsibility of governing Alaska. In 1877 it withdrew its troops, saying that the soldiers were needed to fight the Nez Perce Indians in Idaho. The Treasury Department assumed the job of governing Alaska and then later handed it off to the U.S. Navy.