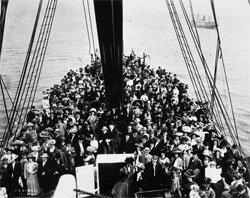 A large crowd on the deck of a ship
A large group of people on the deck of an unidentified ship, two other ships are in the distance. This group is probably just about to enter Nome, Alaska.
In 1848, the same year gold was discovered in California, a Russian geologist named Petr Doroshin explored Alaska's Kenai Peninsula for minerals. He reported finding gold in streams emptying into Kenai Bay. Rumors of gold in Alaska soon spread through California mining camps. Working their way north from California, prospectors found gold on Telegraph Creek in Southeast Alaska in 1861. In 1872, following another discovery in a Stikine River tributary, there was a rush to what became known as the Cassiar gold district.

Other small gold discoveries by prospectors headquartered at Sitka led to the organization of Alaska's first mining district on May 10, 1879. Prospectors wanted their claims legally recognized because Congress had failed to provide civil government for the Alaskan territory.

Building Road to Perseverance Mine 1908.
A big strike was made the following year. Chief Kowee led prospectors Richard Harris and Joe Juneau to Silver Bow Basin on the mainland east of Sitka and north of Fort Wrangell. Hearing the news, several thousand prospectors and entrepreneurs rushed north from Portland and San Francisco and they founded the town of Juneau. Two years later, miner John Treadwell located hard rock gold deposits on Douglas Island across the channel from Juneau. In 1887 he formed the Alaska Treadwell Gold Mining Company. Before the mines flooded in 1917, the company extracted $67 million worth of gold. At its peak, the company operated 900 stamps to crush the rock and free the gold, and employed 2,000 people.

Prospectors Jack McQuesten, Arthur Harper, and Alfred Mayo began looking for gold in the upper Yukon River area in 1873. For the next 25 years they grubstaked hundreds of men to keep searching for gold. A grubstake gave food and supplies to a man for a season, and was valued at about $500. By 1896, when the Klondike discovery was made, an estimated 1,600 people were in the upper Yukon River basin; about half of them were grubstaked by fur traders.

Other prospectors tried to find gold deposits reported by the Russians on the Kenai Peninsula. Although there is some argument about who, when and where the gold discovery was made, prospectors staked placer claims in the late 1880s at several places on the peninsula. An estimated 3,000 people rushed to the northern Kenai Peninsula in 1896 and founded the towns of Hope and Sunrise. 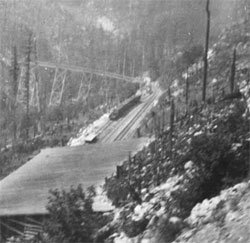 A portion of the White Pass Rail Road
A portion of White Pass RR climbing from Skagway to Summit. Three portions of track one above the other. The train's speed was about that of a man walking in many places.
On August 16, 1896, George Washington Carmack, Tagish (Dawson) Charlie Mason and Skookum Jim Mason made the discovery in Canada that started the great Klondike gold rush. Word did not reach the outside world until July 1897, almost a year later. Most of the estimated 80,000 people who participated in the rush took routes through Alaska to the Yukon-the Chikoot Trail, the White Pass Trail, the all-water Yukon River route, or the rough Valdez Glacier Trail. At least one-third of the people who embarked for the Klondike turned around. Those who reached the Klondike were too late to stake claims. Most were also too late to leave on the steamboats that year.

News of a big gold strike on the Seward Peninsula in the fall of 1898 did not reach the Klondike until late the following spring. Known as the "Three Lucky Swedes", Jafet Lindeberg, Eric Lindblom, and John Brynteson discovered gold on Anvil and Snow creeks. After hearing news of the strike, people rushed to the area named Nome. In a single week, 8,000 people left Dawson for the coast. Thousands headed north from the Pacific Northwest and California. As had happened in the Klondike, those who came the following spring found the claims staked along all the creeks. Luckily, in July 1899 placer gold was found in the beach sands at Nome.

A judge ruled that the beach could not be staked, so more than 2,000 people camped along thirty miles of the beach and mined the sand twenty-four hours a day with gold pans, rockers and sluice boxes. They found over $2 million worth of gold that summer. Workers from mines along the creeks, making good wages (as much as $11 a day), left their jobs for the beach. Between 1899 and 1910, miners took more than $46 million worth of gold from the Nome mining district

If there was gold at the headwaters and gold near the mouth of the Yukon River, prospectors thought that tributaries through the middles reaches of the river must have gold as well. They were right. On July 22, 1902, Italian immigrant Felix Pedro found gold in the Tanana Hills and his discovery led to the founding of Fairbanks. The gold in the Fairbanks area was buried deeply. Miners often had to dig 200 feet through permafrost ground to reach bedrock and find the paystreak. It was worth the effort. . Over the years, the total production of the Tanana gold fields was greater than that of other northern gold fields, even the Klondike.

The Juneau, Nome and Fairbanks gold fields were Alaska's largest, but prospectors found gold in many other places around the territory. Of those discoveries, the rush to Iditarod in 1909 and 1910 is the best known because of the annual dog sled race that is run over old mail and freight trails that served the area. Large companies began to take over individual miners and small groups of partners. With funds from the sale of stock, the companies brought in hydraulic hoses, draglines, and small dredges for large-scale placer mining, and built mills at lode mines.

Barge load of gold ore
River boat Yukon's first trip of 1923, with a close up view of the barges full of 1,000 tons of gold ore from the Mayo district with a value of $500,000.
The completion of the Alaska Railroad in 1923 cut the cost of freight to interior Alaska, and tapped coal mines to provide a cheaper source of power. The railroad helped gold mining in the Fairbanks area. The U.S. Smelting, Refining and Mining Company of Massachusetts bought hundreds of gold claims in the area and brought in the first of a fleet of eight dredges to work the creek beds. Known as the Fairbanks Exploration Company or the F.E., operations started in 1926. In the 1930s, one-third of the population of Fairbanks worked for the mining company.

At the same time, lode gold deposits north of Anchorage in the Willow Creek district began to be developed. Along with all the other gold mines in Alaska, they received a boost in 1933 when President Franklin D. Roosevelt raised the price of gold from $21 an ounce to $35 an ounce. Mines that had not been worked for years reopened. Gold mining abruptly stopped when the United States entered World War II and Roosevelt issued Executive Order E-208 closing all mines not essential to the war effort.

After the war, the fixed price of gold at $35 an ounce was not enough to meet the increased cost of labor and to modernize the mining equipment. Mining stopped in Alaska until the mid-1970s when the U.S. Government stopped fixing the price of gold. The price soared, peaking in 1980 at $850 an ounce, then settling between $250 and $400 an ounce. Mines throughout Alaska reopened. Exploration work led to gold discoveries north, east, and west of Fairbanks. Advances in technology changed mining. So did new concerns about damage to the environment and water quality.

Some historians argue that even more than the fur trade or salmon canning industry, gold mining encouraged the building of an infrastructure in Alaska. Gold brought more people to the territory than did other industries. They established towns and demanded services from the U.S. Government. The government then built and maintained a telegraph line, trails, roads, and a railroad.